Teams from the Region and the North Area of Scotland met at Leven Links to contest the annual match for the engraved decanter.

The Area had struggled to field a full team for the match but the Region, being oversubscribed with interest for this tremendous venue kindly offered the services of some of their most talented players to preserve the integrity of the fixture.

As luck would have it there were subsequent withdrawals by two players for medical reasons in the days before the match so each team eventually fielded nine players in the contest.

The day dawned slightly overcast much to the relief of the players as they, and the course, had been scorched for the previous two weeks.

Very little 'green' was on show and the firm fairways and greens provided some interesting golf on the day.  Par fives were reduced (for some) to a drive and a nine iron but the course was no less difficult as a consequence.  Balls bounced forever and, if Alistair MacDonald, the Secretary of the adjoining Lundin Links would like to return some of the balls he perhaps found in his car park, we would be most grateful.

The staff at Leven, headed by host secretary Verne Greger made us most welcome and our thanks go to his club for their generosity in extending their courtesy to us.

A great days golf was rounded of with an excellent meal in the clubhouse and sun and wind beaten players returned home having had a splendid day.

The results were as follows; 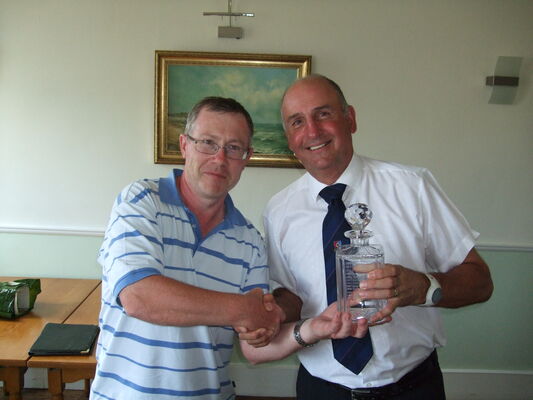