2013 Match between GCMA Scottish region and the ELPC

Regular readers will know that the match last year had to move to Bruntsfield Links as the new clubhouse at Baberton was under construction.

Keith Nicholson the host Secretary proudly showed off his new home to the assembled teams and what a gem it is.  A grand two storey building with a balcony overlooking the course (but thankfully not directly overlooking the final green).

The reconfigured golf course had those feeble minded of us meandering around like lost sheep but at least the pace of play was kept up as we were scared to lose the group in front in case we lost our way.  The course is still undergoing redevelopment but it won't be long before it is back to the Baberton we have enjoyed playing for many years.  We wish the members every success for the future.

The weather held fine and after a few tweeks to the draw to cater for late withdrawals and a snack lunch, battle commenced.

The results were as follows;

The photograph shows Tom Gowan, President of the ELPC presenting the trophy to Immediate Past Captain of the GCMA Scottish Region, Barry Knowles. 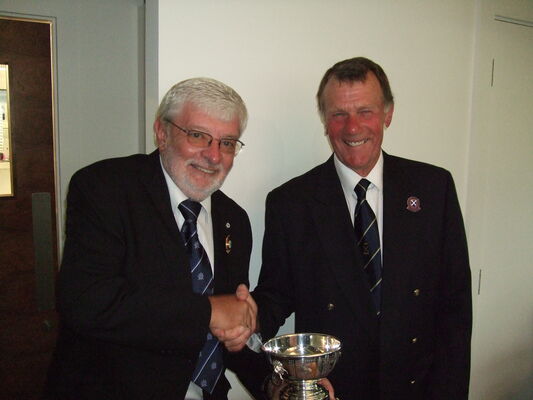